The absence of a centralized authority in the Low Countries came to an end when the Burgundian Dukes, mostly through inheritance, united large swathes of modern-day Belgium and the Netherlands under single rule during the fifteenth century. It was Philip the Good (1396 – 1467), the Duke of Burgundy from 1419 until his death, that made the first real attempt to consolidate power in the region. His approach in achieving this was threefold: establish overarching institutions (like the Estates General in 1446), standardize local forms of government, and bind local elites to him through granting privileges or the use of force. Subsequent rulers would, with varying degrees of success, continue this trend of centralization. 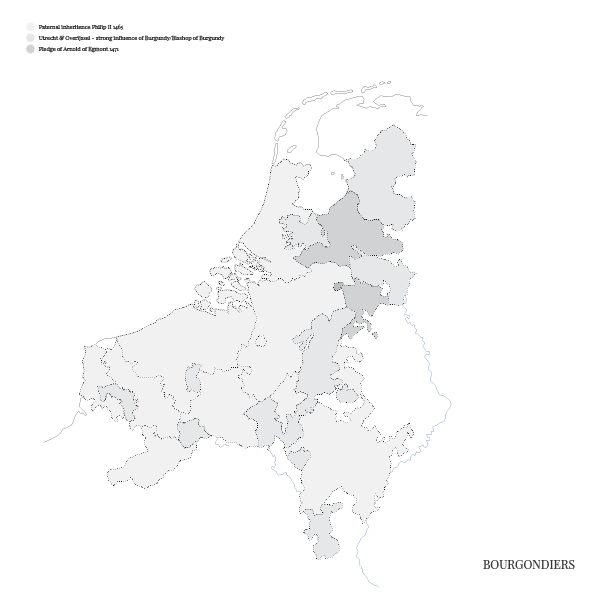 “The absence of a centralized authority in the Low Countries came to an end when the Burgundian Dukes, mostly through inheritance, united large swathes of modern-day Belgium and the Netherlands under single rule during the fifteenth century.”

At the end of the fifteenth century, territorial states ruled by hereditary monarchs were the most prevalent form of political organization in Europe. It was during this time that the most well-known royal dynasty of all, the Habsburg Monarchy, gained control of the Burgundian territories. Emperor Maximilian of Habsburg (1459 – 1519) married Charles the Bold’s only daughter and heir Mary of Burgundy (1457 – 1482) in 1477. Maximilian’s successor, Emperor Charles V (1500 – 1558), would subsequently be the first ruler to truly unite the Low Countries in 1543, dubbing all the different counties, duchies, and lordships the Seventeen Provinces. For the first time, this patchwork of territories saw the erection of lasting borders — borders that, until then, language, culture, economic ties, and landscape had failed to establish. 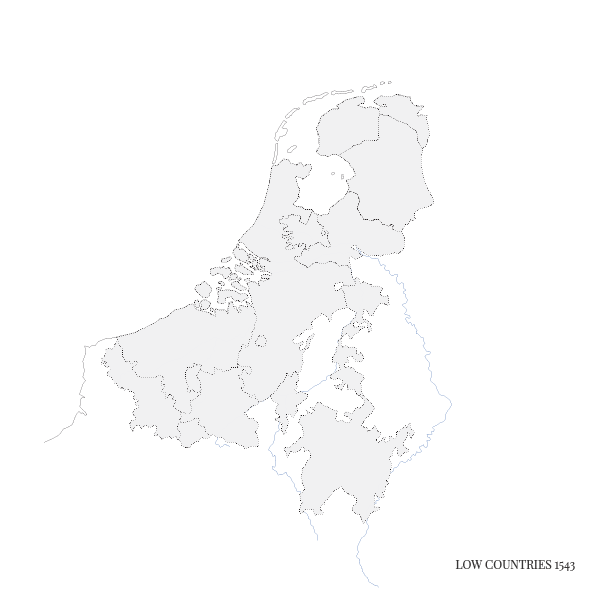 While the incorporation of the Low Countries into the Habsburg empire brought with it a clearer political framework, it also meant that Charles could force the provinces to make ever greater tax payments to fund his wars. This, coupled with an increased repression of Protestantism, led to growing unrest among the local nobles and burghers, who had grown accustomed to certain levels of autonomy. Charles’s son, Philip II (1527 – 1598), intensified his father’s efforts, viewing the Protestants as heretics and those who strove for more representation in government as rebellious. In the years that followed, the provinces’ discontent grew into open revolt, leading to the outbreak of the Eighty Years’ War (1568-1648) and to the subsequent founding of the independent Republic of the Seven United Provinces in 1579 in the north. The joint resistance against the Spanish had fostered a real sense of state unity in the northern territories. On the other hand, the south, and the Walloon elite in particular, felt increasingly alienated from the radical northern Protestants. This, alongside important concessions from Spain to restore local privileges, led to the southern decision to remain under Habsburg rule. The eventual armistice and definitive partition of the Low Countries would be defintively settled in the Peace of Münster in 1648, as part of a larger treaty: The Peace of Westphalia. 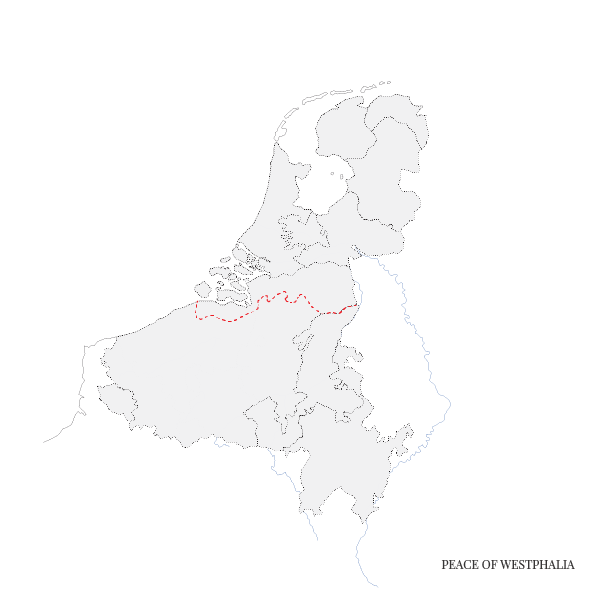 “The eventual armistice and definitive partition of the Low Countries would be settled in the Peace of Münster in 1648, as part of a larger treaty: The Peace of Westphalia.”

The Peace of Westphalia marked the end to a broader conflict in Europe, namely the Thirty Years’ War (1618 – 1648). In this conflict the greater part of the continent’s disagreements regarding religion, territory and trade had come to a head. With the war’s resolution, European states agreed to respect each other’s exclusive authority over specific lands, thereby establishing the modern political structure of Europe as a community of sovereign states. Territorial integrity, and with it the importance of borders, would hence take center stage in the realm of European politics.